Do you work in a business that is concerned with the energy performance of buildings, assesses buildings and supplies or installs and maintains energy saving solutions?

How would more efficient results and greater energy savings help drive the success of your organisation?

This could be possible with the Ecrofit project’s software and professional development opportunities.

The Ecrofit project is designed to provide better quality software and professional development that will help your business improve their retrofitting capabilities and enable greater energy efficiency measures in new builds.

The Ecrofit project in partnership with Birmingham City University and part-funded by the European Regional Development Fund.

The programme is working with the Awarding Body of the Built Environment (ABBE) to establish links to retrofit and energy assessment schemes.

BENEFITS OF THE ECROFIT PROJECT 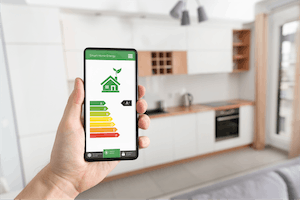 Improve your assessment results with an innovative energy assessment tool (iRet) – through the programme you will have access to an easy-to-use tool that will provide additional functionality to the industry used SAP based standard tools. Benefits of the iRet tool include:

On top of accessing an innovative new tool your business will have access to the latest training and knowledge exchange through workshops, events and the potential for research collaborations – all free of charge.

WHO IS IT FOR?

The programme is for professionals in established small and medium sized businesses in the greater Birmingham and Solihull area who work in building energy assessment or supply and maintain energy saving solutions.

This programme could be particularly of interest to companies that are part of the wider energy efficiency supply chain for retrofit and new build homes, for example:

This project is co-financed by the European Union through the European Regional Development Fund. Project Number: 12R19S03429

WHEN ARE THE WORKSHOPS?

The workshops will be held over the following periods, you must attend all three in succession. All workshops are held online and in the classroom, to suit your situation:

HOW CAN I GET INVOLVED?

To enquire about how to access free tools and training through the Ecrofit programme, enquire below.

Is this service free of charge?

Yes, accessing our academics and specialists is free.

We do however, expect you to commit time and resources to the project. There may also be costs associated with the project that fall outside the scope of our collaboration.

Am I eligible to use this service?

If you are a business or organisation within the private, public or third sectors, based locally, nationally or internationally, and are looking to partner with Birmingham City University on R&D activities in the following fields, then we welcome your application.

How long will I receive support for?

The duration of the R&D Partnership is dependent on your needs.

We will review your application and work with you to develop a working timescale to help you achieve your ambitions.

Where are you located?

If you are eligible for support, the Research & Development Partnerships team will work with you at either one of Birmingham City University’s campuses and/or your business location.

What is “GBSLEP” and do I need to be located in this region?

Unlike some of our other business support services, there is no requirement for Research & Development partners to be located within the GBSLEP region.

I’ve made an enquiry, what next?

A member of the Research & Development Partnerships team will review your enquiry and be in touch shortly.

INNOVATE YOUR BUSINESS WITH...

This website uses cookies to improve your experience while you navigate through the website. Out of these cookies, the cookies that are categorized as necessary are stored on your browser as they are essential for the working of basic functionalities of the website. We also use third-party cookies that help us analyze and understand how you use this website. These cookies will be stored in your browser only with your consent. You also have the option to opt-out of these cookies. But opting out of some of these cookies may have an effect on your browsing experience.
Necessary Always Enabled
Necessary cookies are absolutely essential for the website to function properly. This category only includes cookies that ensures basic functionalities and security features of the website. These cookies do not store any personal information.
Non-necessary
Any cookies that may not be particularly necessary for the website to function and is used specifically to collect user personal data via analytics, ads, other embedded contents are termed as non-necessary cookies. It is mandatory to procure user consent prior to running these cookies on your website.
SAVE & ACCEPT

Making it easier to
support your business